This post of mine is not about war nightmares but about global indifference that, in some case, is more awful than war. 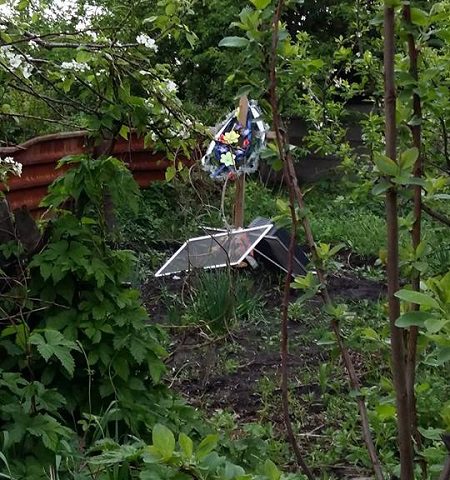 Opytnoye village again, near the contact-line.

Mariyah Fedorovna is living in Opytnoye. The war had taken her child. The only memory the war left to her is the christ as a monument in her garden. Last December Mariyah Fedorovna and her son were at home. There were waiting shelling out. One of splinters had got into gas pipe. Viktor, Mariyah Fedorovna’ son, and several neighbors went to repair it.

— As if I felt it. I told him: Sonny don’t go while its shooting. He told me: What if gas explodes?

Viktor climbed on the pipe. After the next close explosion, he fell down – one splinter hit his head. …. Mariyah Fedorovna is old and ill. Walking is hard job for her. But that time she had to walk several kilometers through the snowed debris to the nearest check-point.
— I was walking and crying through the darkness: don’t shoot at me, please! Please, don’t shoot!

She was heard. Nobody was shooting.

Military after hearing an old lady’s story have reacted immediately. In ten minutes Viktor had already been in emergency’ car. But Viktor’s life was not saved. He was taken from one hospital to another. In the third one he died on his mother’s hands.

She did not allow to bury her son far from his home grounds.  Cemetery in Opytnoye is not available for locals any more – this is the area of fierce fighting.

That is why neighbors buried Viktor near his native home. His mother comes to this christ every day. She tries to speak with him.

She manages to say just “Vitya, sonny!” and starts to cry. ***
— Her grandfather died before war. He was the man with weirdness. Can you imagine that he managed to make coffins with his own hands for himself and his wife? He said that while he has force in his hands he should prepare beforehand – Rodion, the neighbor of Mariyah Fedorovna, recalls. – The second coffin just stood in the house. Here it came in handy…

For several seconds he looks in the sky. —  We already had such situations here. Three houses further we have buried one of our neighbors near the road under the poplars, – Rodion continues. – And in the end of the street one man ran out in a bad time. Straight shooting. Just in front of me his arms and legs scattered in different directions… We were gathering him by parts to send to Dnipropetrovsk to his relatives…

Marina Fedorovna is sitting in the Rodion’s yard on the bench.

— She is alone now. Her dog was also killed when the bomb got into her garden, – he sighs. – She comes to me and sits here for hours. Sometimes we say couple of words to each other, sometimes we sit in silence. How can I boot her out? I just can’t…