The League of Laughter in Kramatorsk 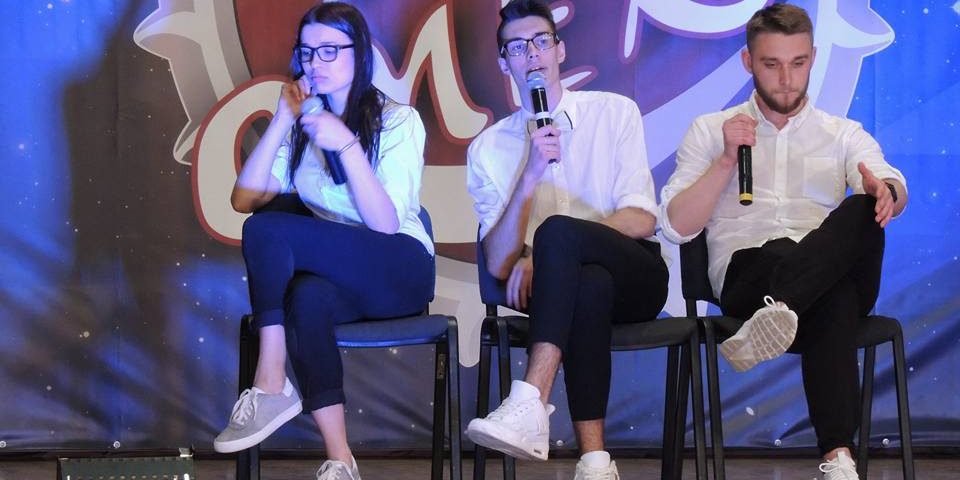 The material values are necessary for happiness, although, the good mood is inalienable part of it. That’s why, under our responsibility, we had organized the city holiday and, in the same time, the contest of humor – League of Laughter – for the students of the region.

Everything worked out. No-one had forgotten the words (at least, it seemed to me so), the sound was without an interruption, the decorations and light looked spectacularly. And the main thing - jokes! Without any mercy we had been cutting the teams’ scenarios in order the miniatures would be 100% funny. Eight teams from the regional universities, seemed to be preparing during the nights to make their presentations perfect, as during for the concerts of Kvartal 95 (popular Ukrainian comic team).

For example, everyone was much surprised with a team from Druzhkovka boarding school for the vulnerable children. The main objectives of their jokes were… themselves. Such self-irony was not expected and, as much unexpected, was that one of the jury representatives had provided to this team additional financial prize! The FEN team was sparkling with their white snickers as Yegor Krid (famous Russian pop-singer) with his white teeth. But not only with their style the boys were fascinating us, their program was the most unordinary and, at the beginning, the audience should bare their fascination, and only then react on the jokes with laughter and applauses.

The guy, who had been announcing the team “Guys from the province” (Donetsk national university on economics and trade, Mariupol) was “bursting” the audience much more before he was starting to speak. Because every time he was providing unexpected interpretation on the folk’s wisdom. For example, “as my father used to say: don’t drink water…… near the chemical plant”. What’s there to tell?! It’s better to watch. For those who didn’t managed to visit the League of Laughter, the local channel DoTB (DoTV) is preparing a video version, which we will definitely share.

We want to thank all the partners and sponsors of the League. Our congratulations to the winners’ team “Kolpachky” (the joint team of DGMA and DonNMU representatives)!