Every time somebody is coming, writes down the description of situation and goes way without any result. 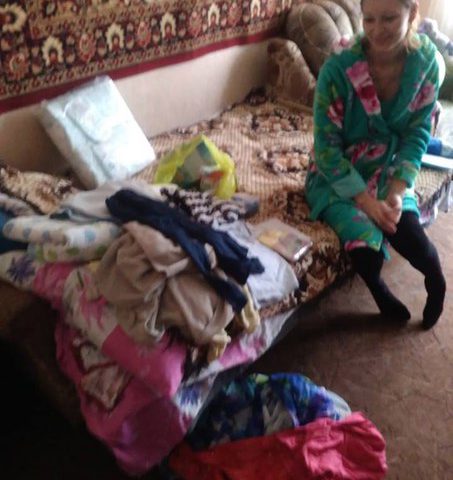 We name people this way in case when they had to leave the conflict zone but did not get under the state social services’ support.

Some small villages, through the still unclear reasons, were not included into stated by the Government list of places belonging to “ATO zone”.

Correspondingly, people, who have left those places, officially are not considered to be IDPs.

She, together with her husband, has moved to Konstantinovka city when her house appeared to be under constant shelling.

Now this young family goes through the new test – poverty. Significant part of their earnings are paid for the rented apartment.

It is high rate of unemployment and low level of salaries in Konstantinovka now. It is rather hard time there for such as Ruslana.

But Ruslana and her husband don’t give up. They are waiting for a baby.

Ruslana’s optimism and joyfulness impress. And attract others – the same as she is.

They try to support each other. And we are trying to support them because, its turned out, there is no one but us.

Moreover: people from Opytnoye village(!), situated on the very front-line, – are also “ghosts”. That is why those people who are still staying there don’t want to live the village.

– Why should we go there, where no one is waiting for us? – they say.
__
Yevgeniy Shybalov