Pillow and a pair of shoes – all that was saved

This year the kids from some families will not go to school.

People got used to live in fear. 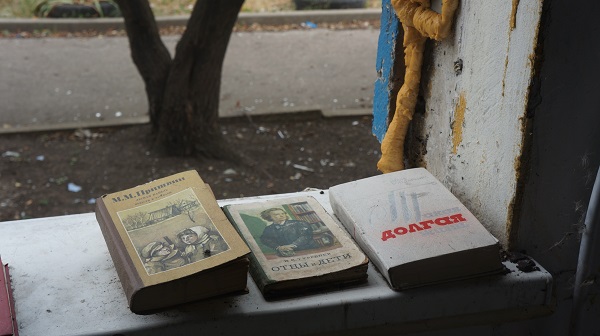 Some parts of the city have become ghostly empty.

In the middle of July there was a straight shelling into nine-stored house No. 7. Specifically, in this house there were people injured in that moment, some of them were hardly saved from under the rubbles.

Many people had left their places of residence leaving only cats and dogs, burned things in their apartments… Only animals are walking around the desolate places…

According to the local activists’ data there are only 65 persons living in 8 five-storied and two nine-storied houses.

- No-no, don’t walk behind that third house. Sniper is working there. We are not going there. Today in the morning there were bullets whistling in the yard.

There is no water, gas and electricity supply. The citizens have built summer shower in the yard and a small kitchen. They should walk to the well. There is a technical water in it but people boil and drink it.

There are mostly old people who have nowhere to go, whom nobody is waiting for.