In Avdeevka there on one child of the war became more. 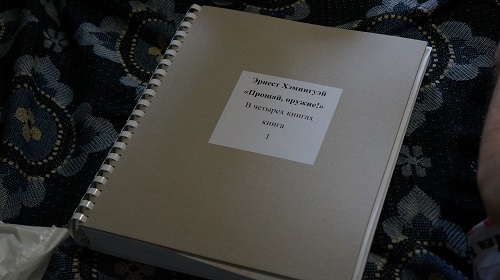 — I have decided that, if such book is hard to find and it is expensive, I didn’t want it to be just a simple detective story.

— Have you tried audiobooks?

— Yes, I did. My father turned them on for me and I was listening. But its’ not the same. I like to read by myself, reread some parts. It helps to understand text better and your fantasy works.

Before losing his sight, Arthur was fond of reading. He was an excellent “A” student. The accident in school left the boy without sight. He had to re-learn to live, to communicate, to read.

His father had developed and Braille alphabet using the old domino. And together with his son, letter by letter, he studied the alphabet of blind.

We have brought “Farewell to arms!” by Ernest Hemingway to Arthur. He asked this book himself – he wanted to start to read very much. It appeared that to get printed materials for blind in Ukraine is very hard. We had to order it in Moscow, where there is a specialized publishing agency.

Arthur is satisfied with his first book. We have asked him what else he is dreaming about.

But for now it is impossible. And that is the hardest part – to tell the truth to a child. Surgeries don’t help. The effect lasts less than two months. Then the retina separates again. Now Arthur and his father hope that there will be found new medical method which will help them.

We are grateful to the “Y’s man international” organization in their support in book obtaining.

Thanks to all of you who read and support us!