About a month ago we decided to help to IDPs activists of Selidovo city. 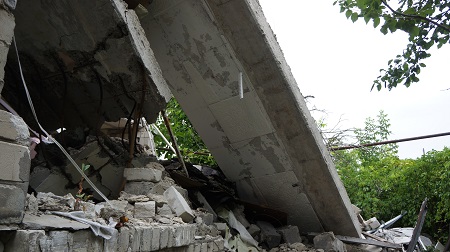 Maryinka and Nikishino.
Now those locations are on the opposite sides of the front-line.
What can unite them?

Ruins, fear and misery – unfortunately, mainly those definitions are able to characterize the life of locals there.

What can be worse?
Only the fact that all these was seen by children.

Small persons with thin mental organization are absorbing, like a mushrooms from the poison ground, aggression of the surrounding them world.

We have been working with children in Uglegorsk and Krasnogorovka, Donetsk and Avdeevka cities. In all cities of the “red/grey zone” we have faced the fact that children were collecting ammunition, shells and various fragments of shelling though their curiosity.

“We have visited the damaged house, where the militaries were living before, and we found a trip wire there! But I overstepped it!” – one little boy laughs during one of our lectures on mine awareness in Avdeevka.

Not once in this conflict in Donbass children were suffering from the “consequences of war”.

Now, it is rather ordinary for this new generation to go down in bomb shelters under the music of blows. They got used to see death, hear the conversations about “hating those, others…” They got used to hate as adults do…

Children are undeniably personalities, but still in the process of forming.
What can be in the result if your childhood and youth are spend in conditions of military conflict?
Should we start to think about whether this generation will have ability to compassion and live in peace?

The video developed id based on the video archive of our trips to Maryinka, Krasnogorovka, Avdeevka, Nikishino, Uglegorsk, Snezhnoye and Donetsk. There are also drawings of IDP children, citizens of the conflict zone.